It’s been a tough day for the FGC. Gun violence jokes & Colorado losing one of it’s own.

A little after midnight on June 11 we learn that a Colorado Fighting Game Community member passed away due to a vehicle accident.

Today has been a really rough day as a community leader. I learned that Lothan "DrStrangeLove" Henry passed away this morning in an auto accident. Also, Mike "Scruffy the Janitor" Woods and Ellis "Divine Emperor" Davie were also in the same vehicle.

Lothan Dr Strange Love Henry passed away in the crash as the other two fgc members, Mike “Scruffy the Janitor” Woods and Ellis “Divine Emperor” Davie are in critical condition in the ICU.

There’s a GoFundMe to help out with Scruffy the Janitor’s medical bills. If you can, donate. It’s nice to see that they’re already half way there.

We don’t know the full story of the crash but we will do our best to keep you updated.

There is also a tournament helping out with funds.

Then we have someone being banned from CEO because a poor taste in jokes. Lately there have been a lot of threats toward FGC events. First starting with threats to E3, EVO and potential CEO or any Florida FGC event. There have been more security precautions being taken toward these events. Attending Combo Breaker this year, I noticed more law enforcement; not a lot but three more officers than I saw last year. As a Black person I remember thinking, ‘Ehh.’ However, as a female I then thought, ‘Oh, yeah I get it.’

Deven D’Addario, Florida Smash Bros player, said he was banned over a joke he made on Facebook.

D’Addario’s posted,
“I’m aware I’m hated on here enough as it is, but in light of an event two years ago today…”
Then there are photos of guns. The screenshot below fosters a false Google answer to the question, How to Kill a Ness main.’ Ness is a character in Smash. D’Addario is a Smash player. There are always memes like this but this one didn’t go over so well with the Fighitng Game Community.

Two years ago there was a shooting at an Orlando Gay night club.
In response to the shooting, CEO organizer, Alex Jebailey, took the necessary precautions and upped security to make attendees feel safe.

The FGC quickly put their foot down about this alleged joke D’Addario was making.

I have absolutely no tolerance for any sort of gun related jokes within gaming communities. I will not hesitate to instantly refund a CEO registration, ban from any of my events and make sure local authorities and my venue security are aware of this sort of behavior by anyone. pic.twitter.com/jzlW3BihgI

While everyone is assuming he’s talking about the night club shooting he was actually referring to a finalist on The Voice, Christina Grimmie, who was a Ness main being murdered while signing autographs in Orlando.

D’Addario has been banned from Central Florida League, CFL. He said he’s been banned from CFL for raging but there have been allegations about him since Frame Perfect Series 2, FPS2, taking photos up women’s skirts. When asked if he took photos his response was, ‘HELL NO.’

Scrolling through the response on Jebailey’s Twitter you can see that many people are aware of him and his behaviour and the Florida FGC are really banning together to allow everyone to have a safer time.

In a statement when asked about the banning Jebailey said,

From a local community perspective we do not tolerate threatening behavior of any kind.

D’Addario feels done wrong. Check out a few of these messages . He continues to say he doesn’t want to play with people who mistreat him and his Smash career isn’t over. 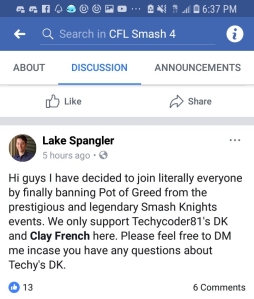 Jebailey called his security team to give them a heads about D’Addario. He plays no games when it comes to the safety of his tournament and attendees. Let’s continue to make the FGC safe and welcoming for all players.

I've sent out the first emails for my live masterclass on Wed Feb 19. If you'd like to join click the link in my bio! If you can't make it the course will be available the next day! #videogamejournalist #writingmasterclass
I'm about to be on the front page of @twitch playing my favorite fighting game @mortalkombat but not as Johnny Cage but as Joker! And I got an outfit for that too! Going live at 7pm EST Who goin be there?!?! Twitch.tv/junaebenne #nrsesports #JunaeStreams #mk11joker
With Sony skipping #E3 y'all still excited for it? I kinda wanna again I met @sisqo the last time I went. Idk what can top that 😂
Up your Journalism game with this course! Get press badges, meet influential people, and have access to game codes for days! #gamesjournalism
Awww bullocks! I was looking forward to this Dystopian Cali in April but I guess I can wait until Sep. How about you guys? #cyberpunk2077
Have heard they're pushing #FFVII back? They said it's for quality purposes. What do you think? #FVIIremake #JRPG #finalfantasy
%d bloggers like this: